Browse: Home / Congress Voted to Allow Your ISP to Sell your Browsing History and Data But VPN’s Got You Covered

So now it’s official; online privacy is history and your worst nightmare is coming true. Your whole online activity and your very personal data are up for sale to highest bid without your approval or even your knowledge.

Although it is not mandatory for ISPs in the USA to retain users’ data, unlike many parts of the world where the government obligates o retain data for 6 to 24 months at a huge cost and no profit, now that ISPs in the USA can benefit from retaining their users data, every ISP without a doubt will get into the game. 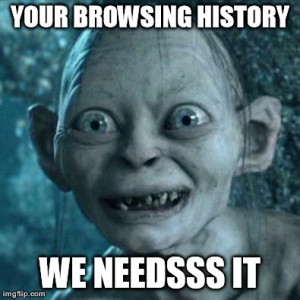 House of Representatives has voted in favor of a legislation to allow ISPs  to sell information about their users’ web browsing and app usage histories to not only advertisers but to the government, insurance firms, entertainment firms… basically any third party that is willing to pay. The legislation has already been passed by the Senate and now it’s headed to President Trump’s desk for his signature. So even if you THINK you have nothing to hide, now would be the time for you to consider using VPN.

What Can VPN Do for Me?

Simply, VPN encrypts your web traffic so it becomes hidden not only from your ISP but from any third party too; NO ONE can monitor your online activity. VPN uses your existent internet connection to establish a parallel connection between your device and a new server managed by the VPN provider. All your traffic will go through the secure encrypted tunnel between your device and the VPN server.

What If VPN Monitors My Online Activity?

A paid VPN service has no interest in monitoring your online activity or retaining your data. Also, most VPN providers nowadays are based in countries that enjoy high level of internet freedom and do not impose data retention laws such as The Netherlands, Panama, Cyprus, West Indies, British Virgin Islands and Seychelles.

However, if you have concerns you can easily search for a VPN provider that obviously stated in its user agreement that it doesn’t keep logs or worst case scenario keeps nothing more than minor logs of VPN usage time and period. Additionally, most VPN providers seek to know as little as possible about you and do not require more than a valid email address to create a VPN account. As per payment method details, you will find that many VPN providers accept a variety of payment methods other than credit card including Bitcoin.

Is It Easy to Use VPN?

Yes, simple as using any application on your desktop or phone. VPN client applications will connect your device to server in a single click.

How Can I Find The Best VPN?

List of servers included: the more locations, the better

VPN protocols: till today OpenVPN and L2TP/IPsec have been proven to be the most reliable with reasonable encryption 256-bit

Customer service: find a VPN which you can reach their customer service easily, preferable via live chat to guarantee instant response and privacy at the same time

Free trial: we strongly advise not to settle for money back guarantee; it’s definitely a waste of time